KEEP UP-TO-DATE
WITH OUR NEWS

Members clubs, islands, schools and beaches – we all want in on the private ones.
In Hong Kong, the same goes for the kitchens, not least because the vast majority of us don’t have space for more than two pans and a wooden spoon in ours and, very often, they even lack an oven.
For non-HKers, a private kitchen is a non-licensed restaurant, often in a coverted house or industrial space, serving up food to an intimate group of diners. Running the gamut from French fine dining to Spicy Szechuan and Creole to Carribbean cuisine, private kitchens are usually devilishly tricky to find and pull a crowd of clued-up foodies who arrive swinging off-licence bags (these are bring-your-own joints).
In my time in the city, I’ve sampled the good, the bad and the ones where the Chinese Opera singing wife of the owner is wheeled out post-meal to perform. I particularly love getting a big group together and taking over an entire private kitchen for the evening – good food, great crowd and guaranteed rowdy fun (with no other diners to complain when the noise levels get too high). So, I always have my ear to the ground for word of some new, exciting private kitchen action.
Recent whisperings, of a fairly recent addition to the private dining scene called Pomegranate, led me to find myself, bottle of Chablis in hand, lost and slightly perplexed in a grey concrete car park in Aberdeen. A rickety lift ride and a wander down a few industrial-looking corridors later though, and I emerged in a sleek, white converted warehouse where a waitress swapped my bottle of wine for a glass of Champagne – much more like it. 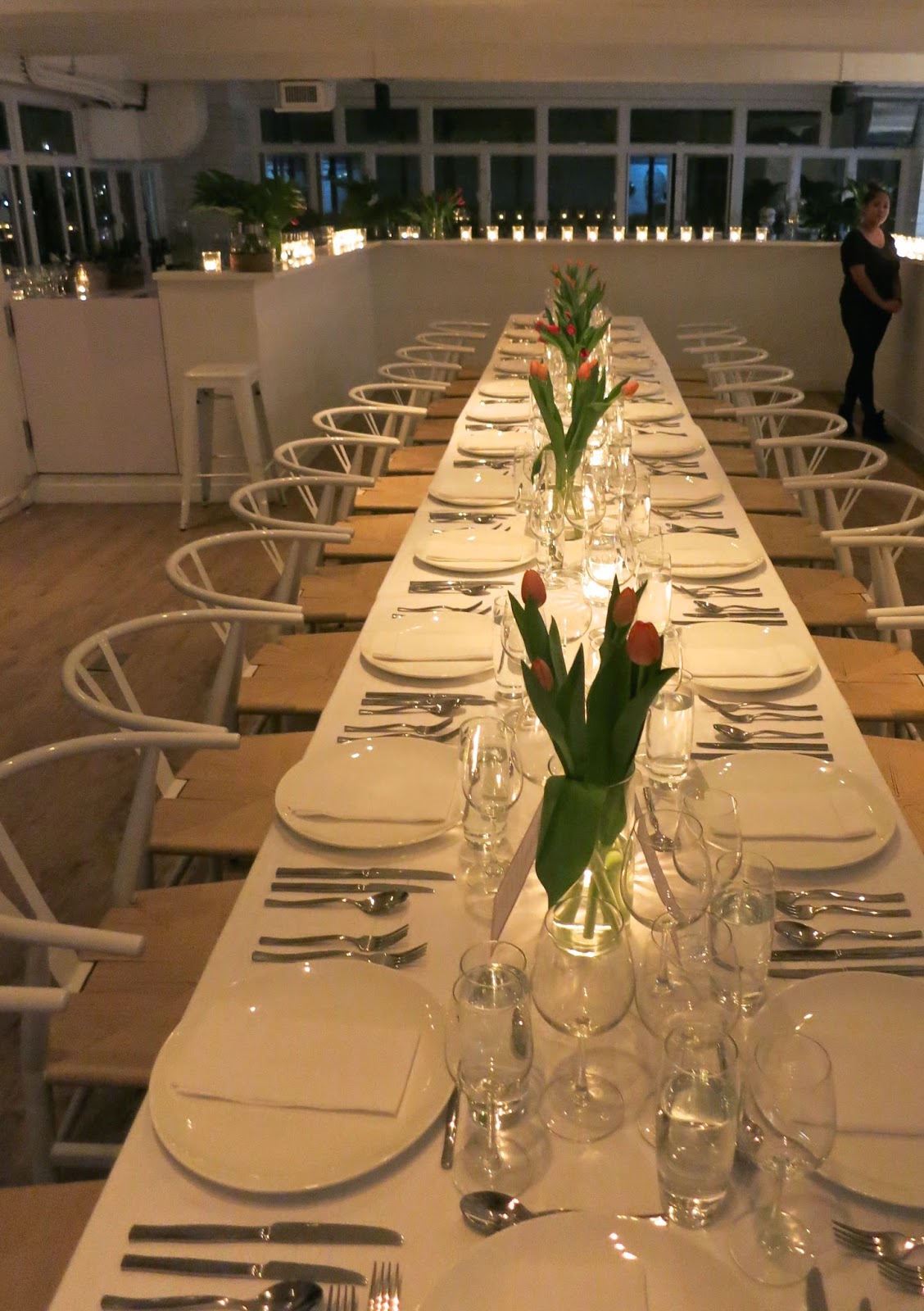 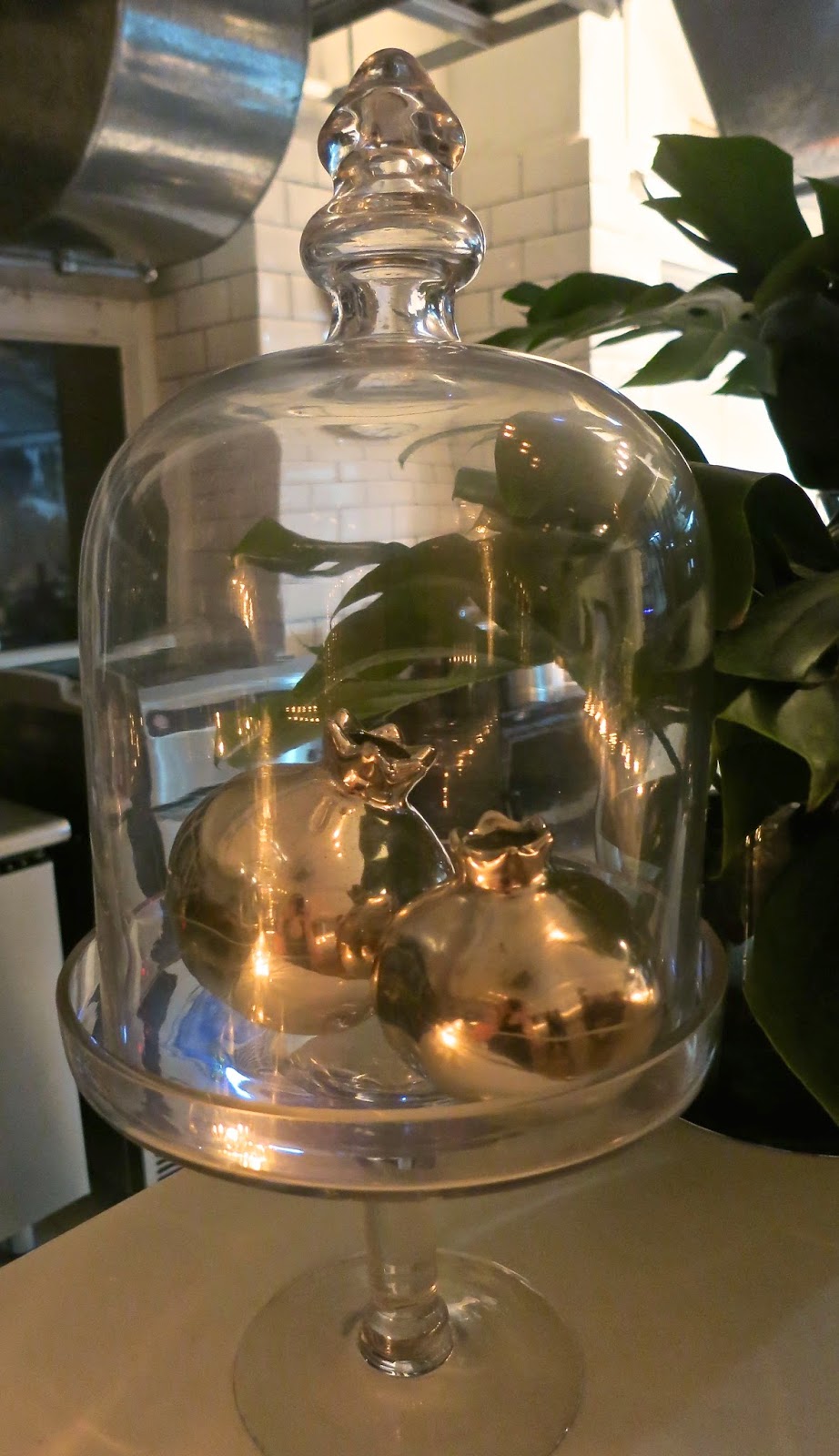 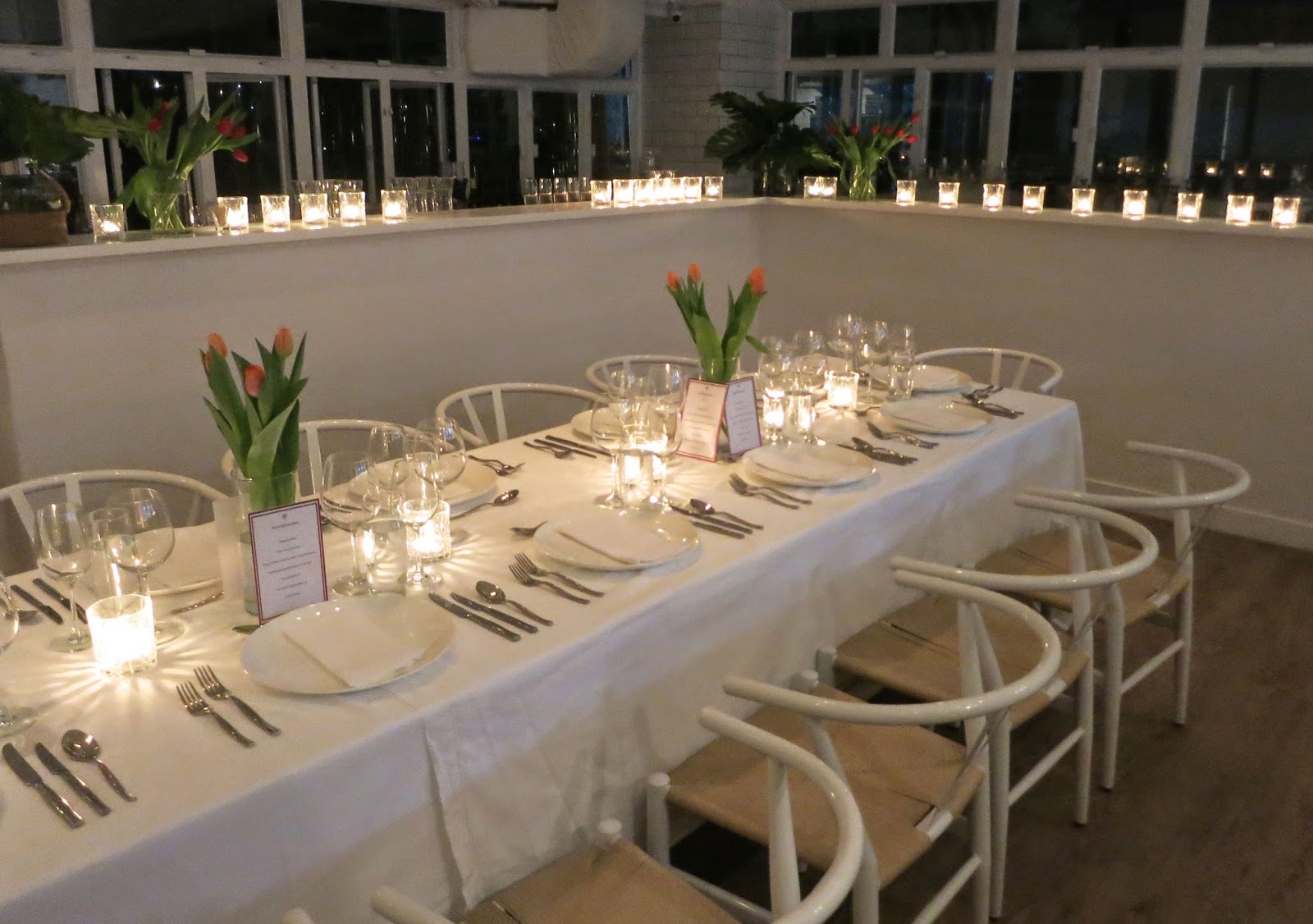 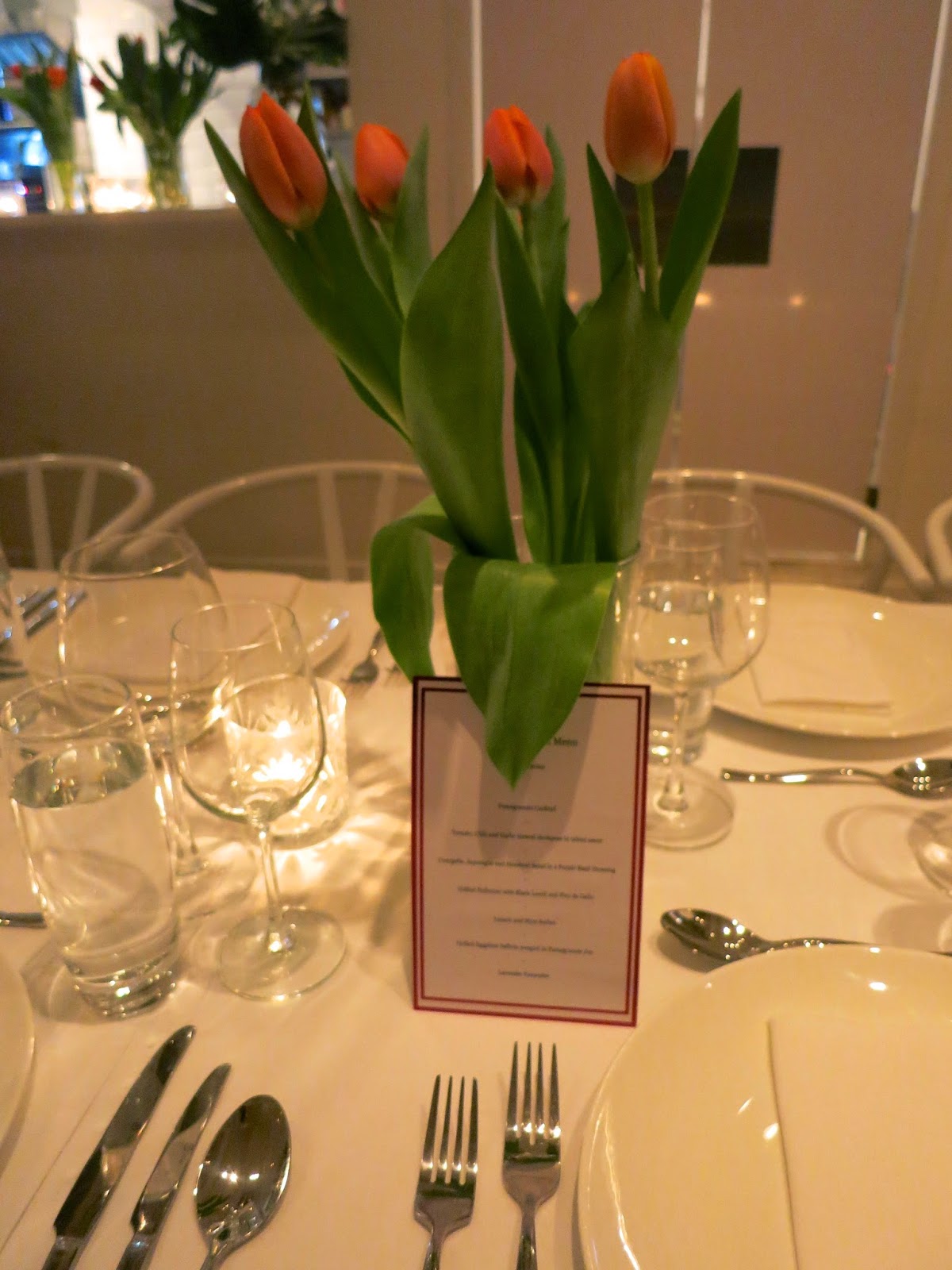 The dining space with wrap-around bar and open kitchen seats twenty six, but flows onto a large terrace where more tables can be laid if you’re a bigger party or would prefer to dine alfresco. We headed to Pomegranate as a group of ten on a Thursday night – the only night of the week that the kitchen is open to smaller groups who all sit family-style around the indoor communal table. The set-up of the evening makes the jumble of diners a highlight by kicking off with pre-dinner Pomegranate cocktails on the terrace which means that you get chatting to your supper neighbours while nibbling on canapes.

As we were meeting new friends, owner and head chef, Maria Bizri, was inside cooking up a storm with her crew in the kitchen. A sneaky peek at the delicious-looking dishes being plated up had our tummies rumbling… 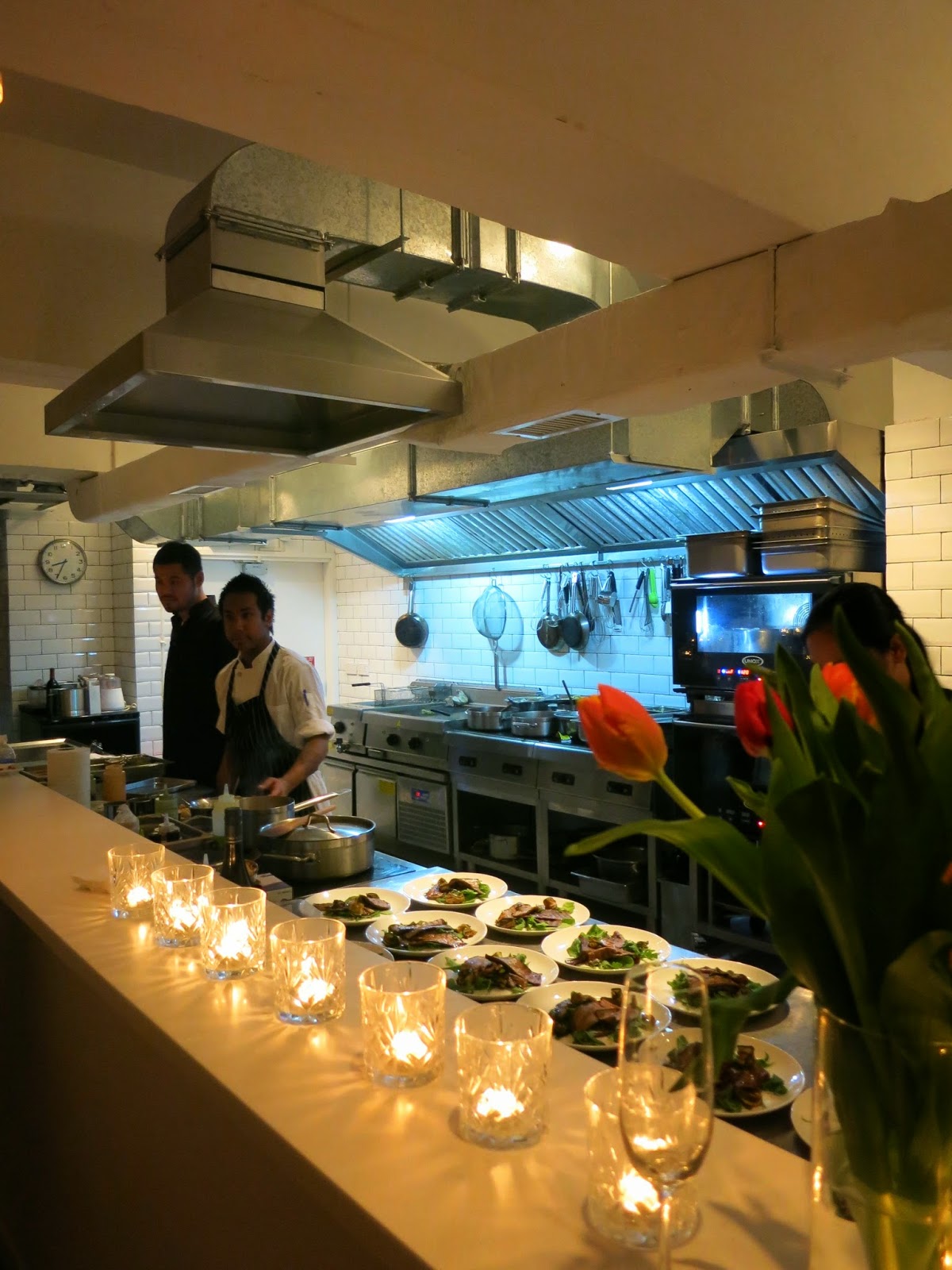 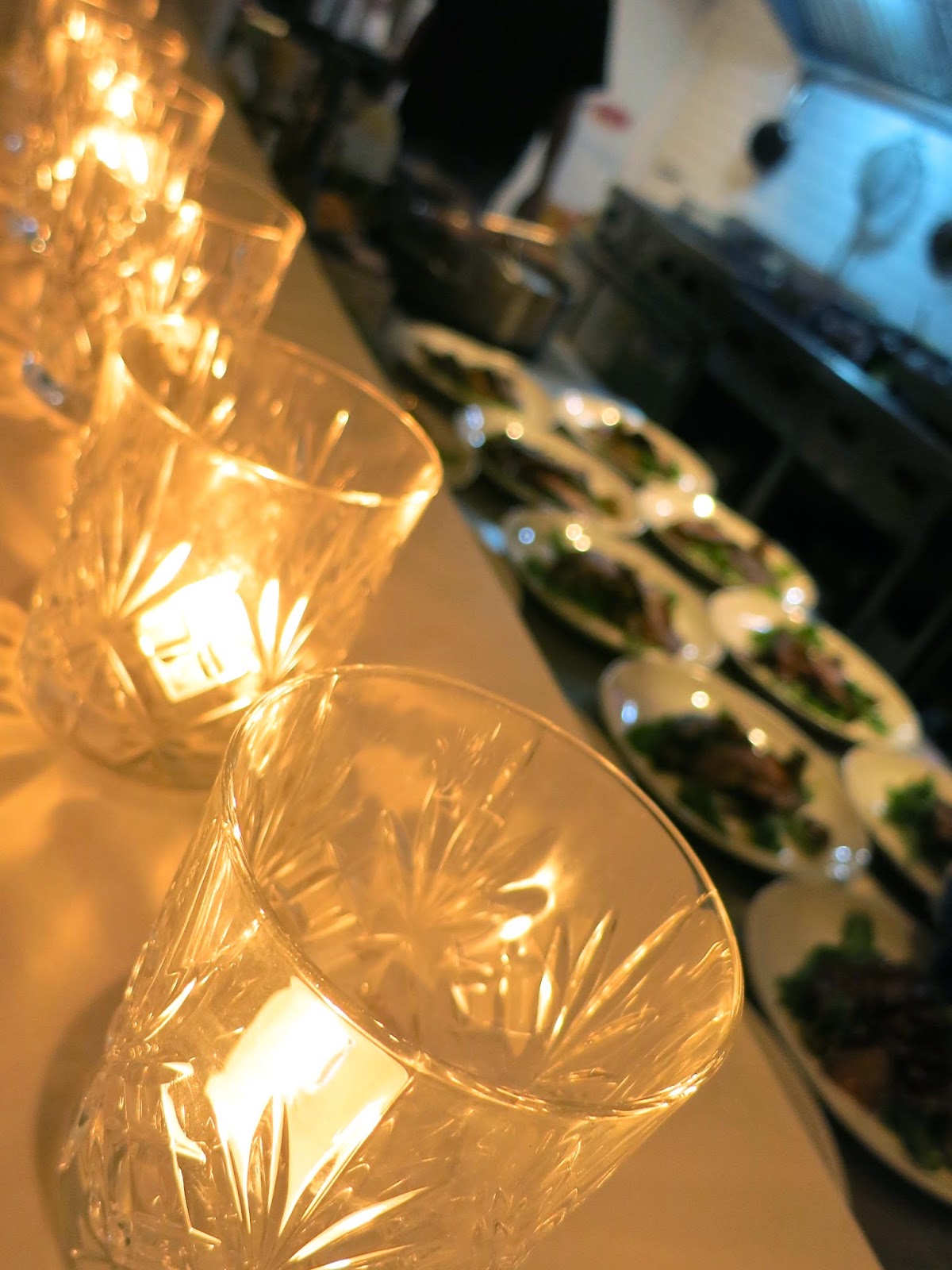 …and a swift scan of the menus laid on the tables confirmed that we were in for a feast. 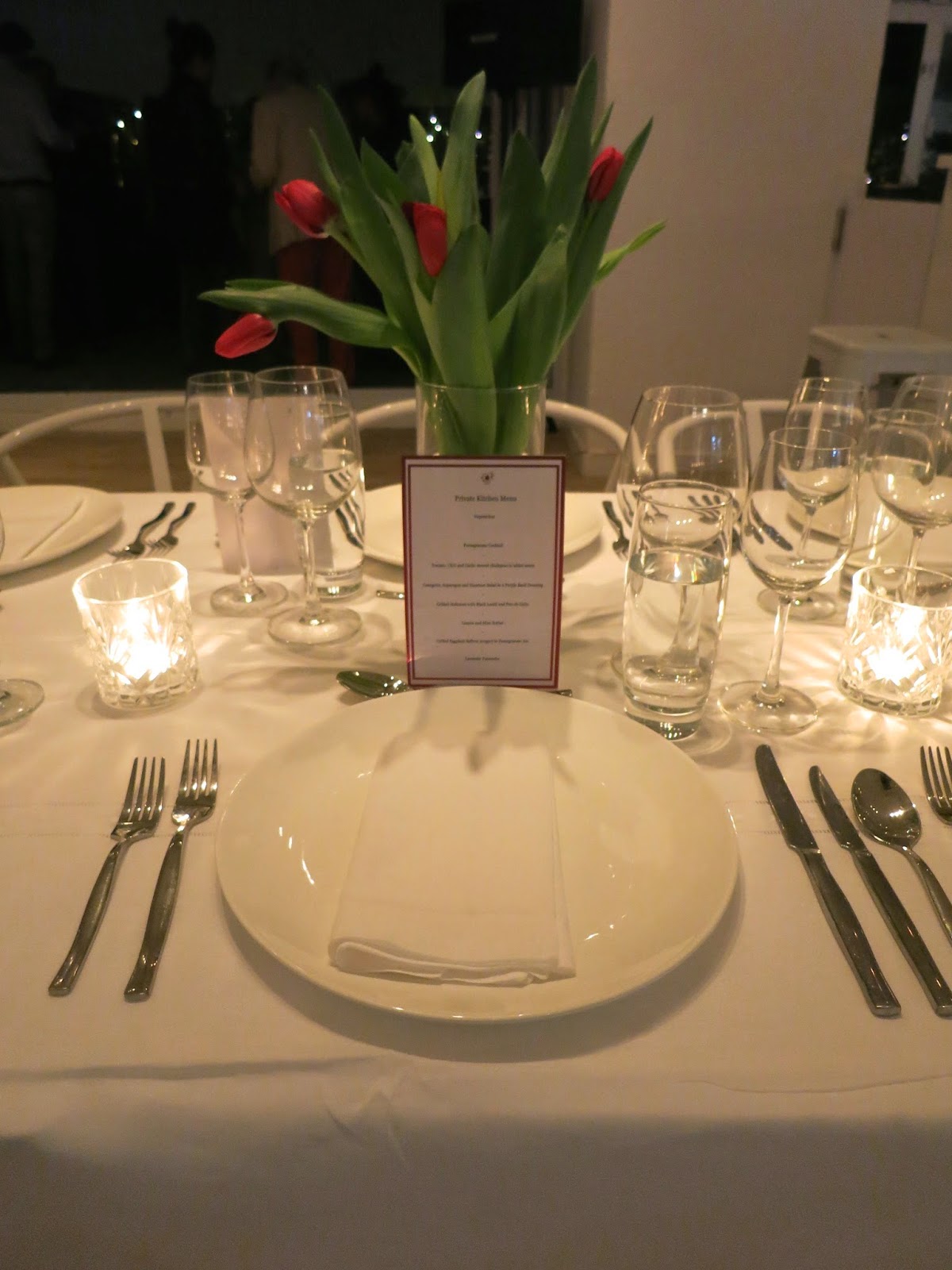 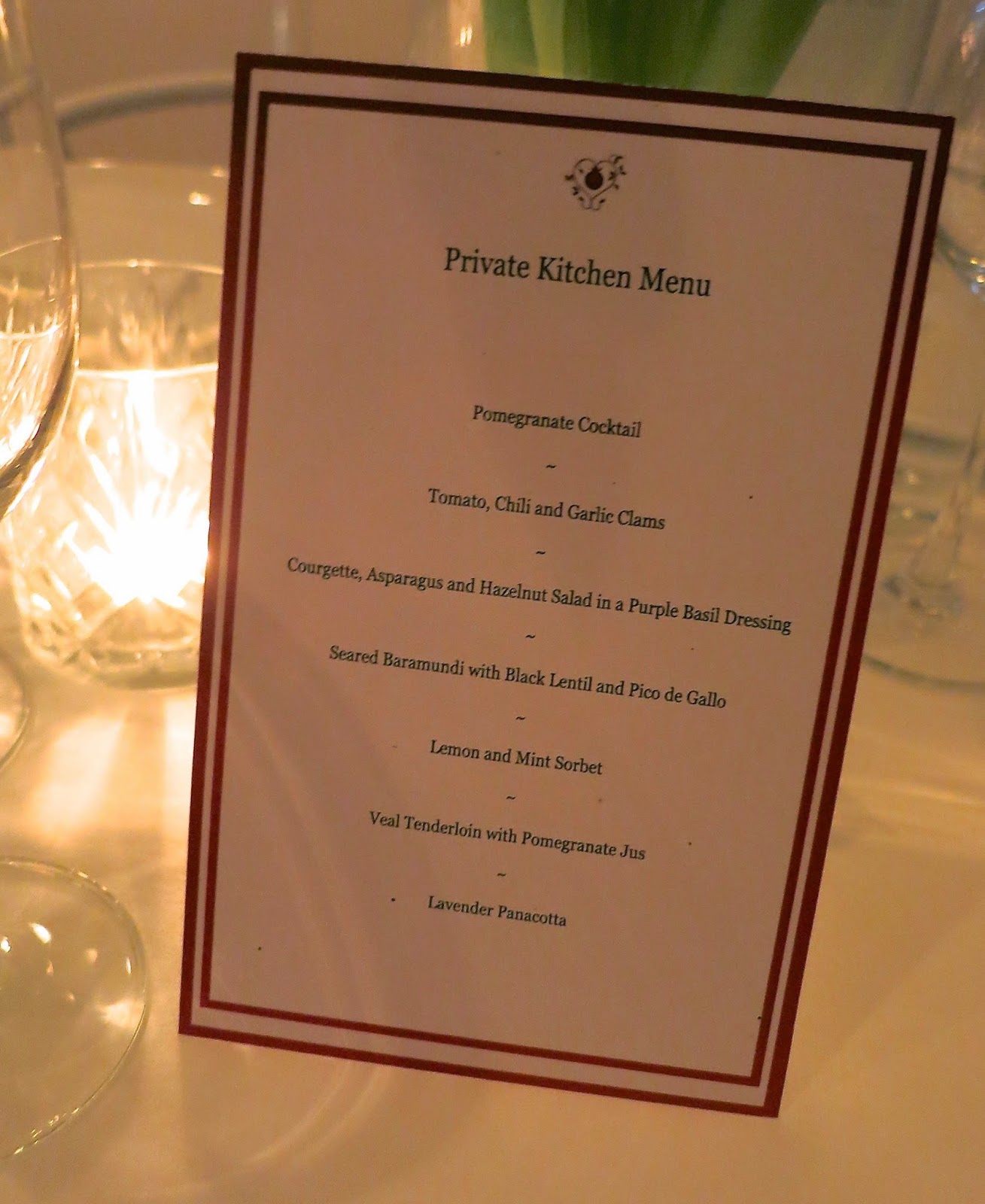 Food at Pomegranate is sunny, hearty and Mediterranean – Maria is Lebanese-born but her creations borrow liberally from Turkey and Greece with generous dashes of Asian spice and a good scattering of pomegranate seeds.

I started off being a very good little food blogger and photographing my plate before I tucked in. So, here are the tomatoey, chili-spiked clams with chickpeas… 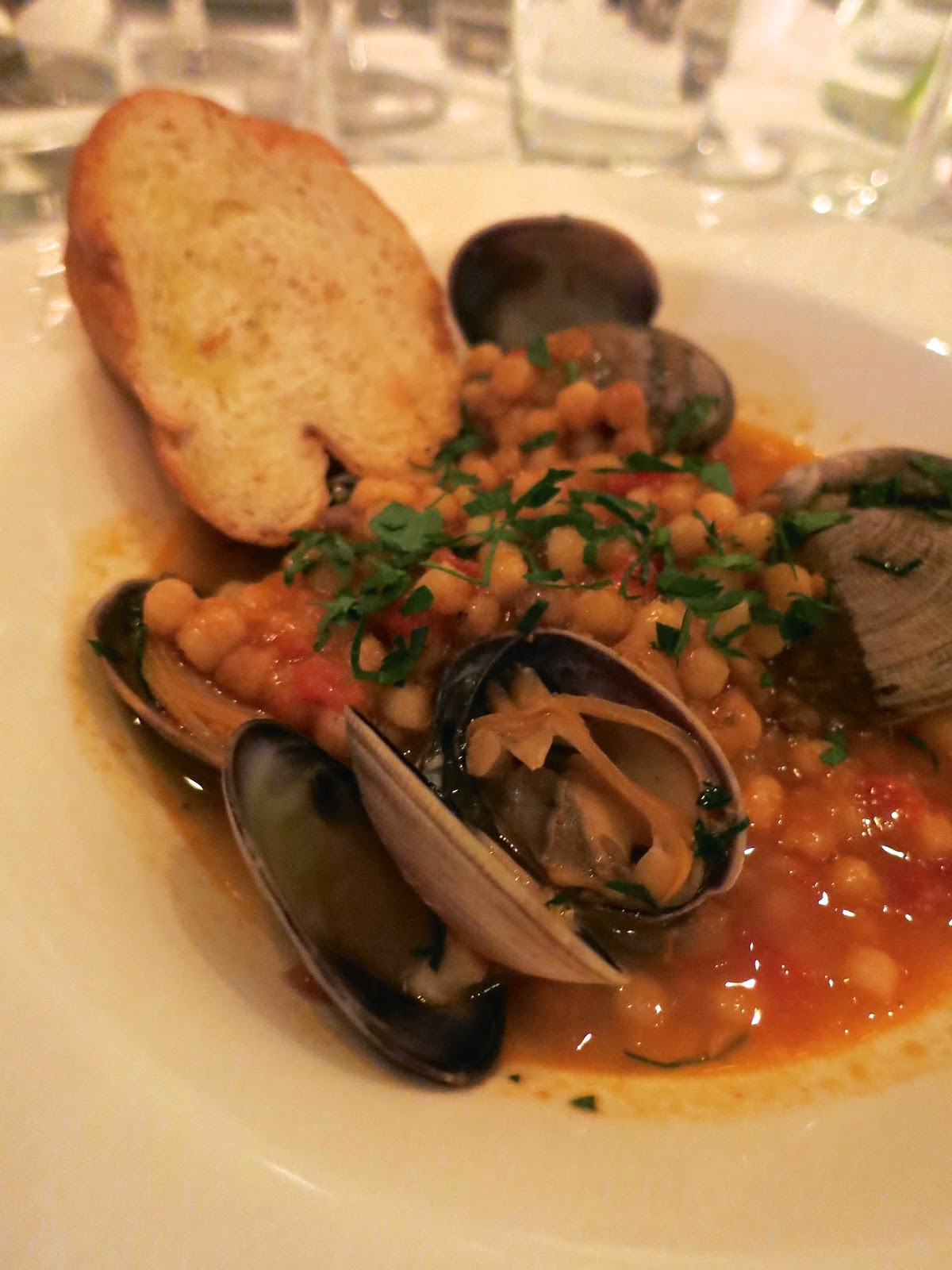 … and the roasted vegetable and houloumi salad – summer holiday on a plate. 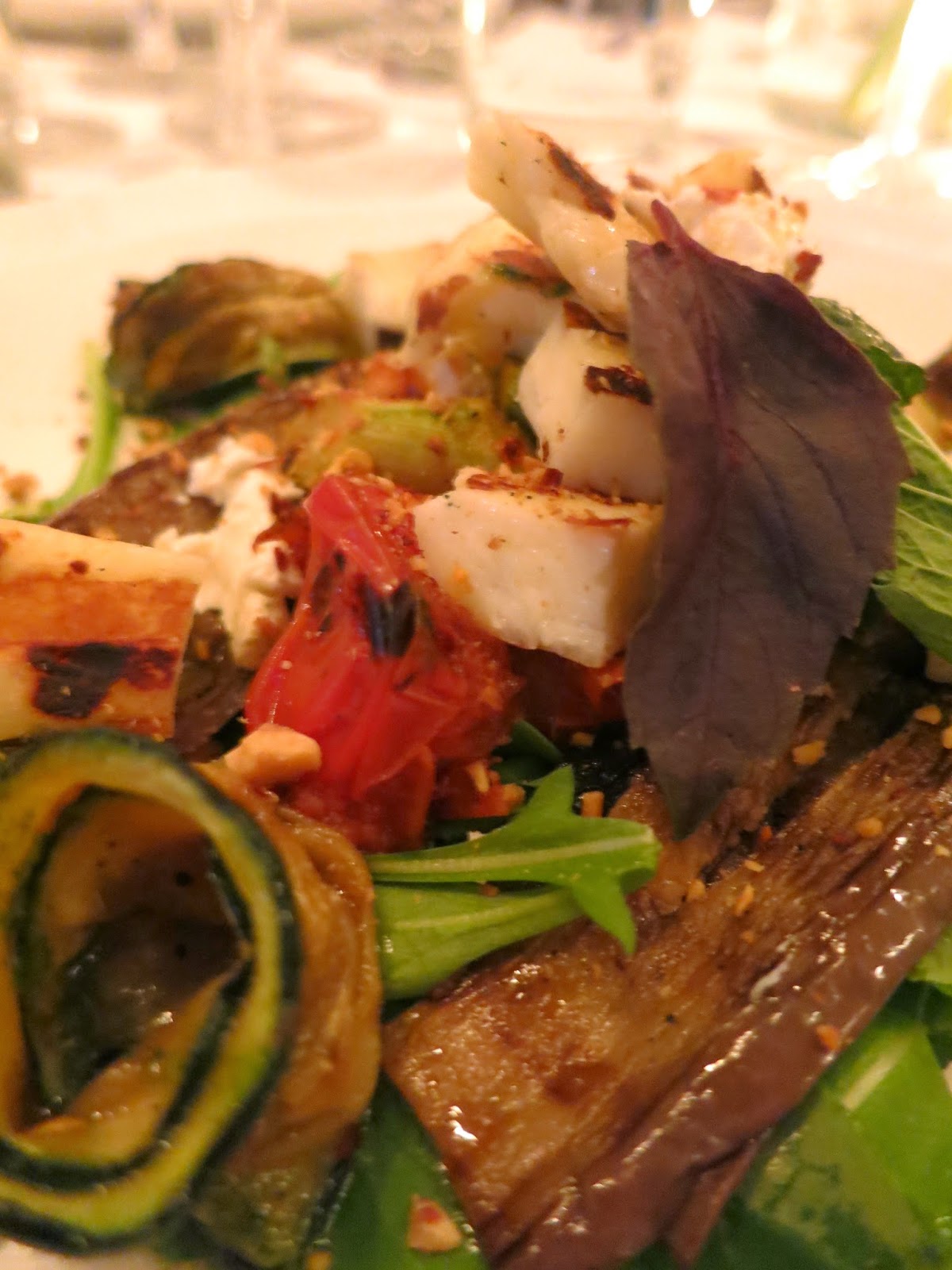 But, yeah, after that I seem to have slipped into some sort of food ecstasy-induced coma which clearly rendered me unable to operate my camera until dessert. I can very much vouch for the deliciousness of the baramundi and veal though, despite the lack of pictorial evidence. Not only was each course generously proportioned and beautifully presented but also so scrumptious that the boys were fighting over the scraps that the girls were delicately pretending to pick at – cause for outright fork warfare.
As the last couple of bottles of wine were uncorked, dessert was unveiled with a nice side of table theatrics courtesy of a blow-torch weilding waiter. 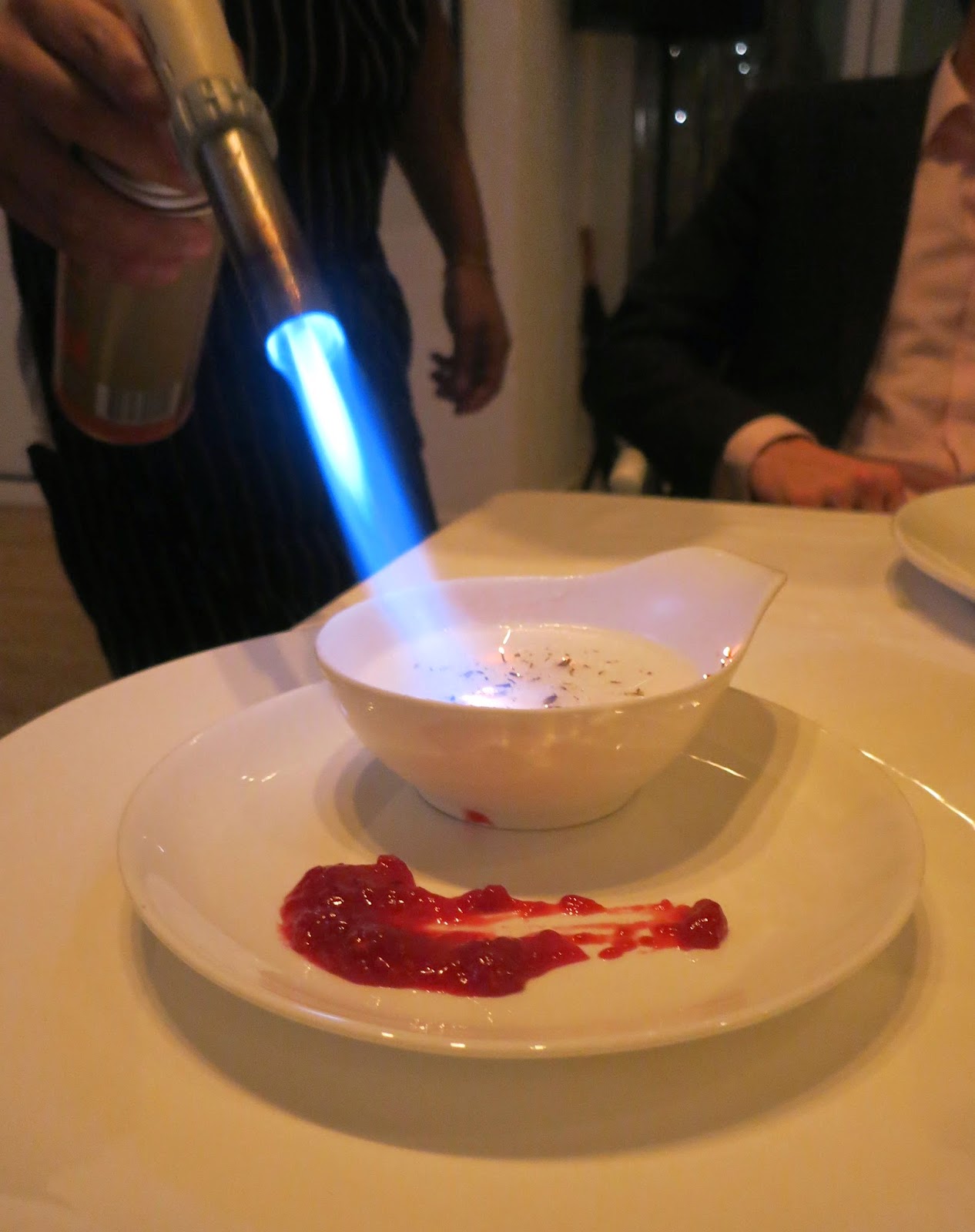 And what a dessert! This creamy, delicate panacotta topped with a dusting of lavender and a smudge of jam was the stellar end to a cracker of a meal.
We highly recommend popping along on a Thursday, but better yet, take the whole place for a party, a wedding reception or just because you haven’t seen your friends since last weekend…